GEOGRAPHY
Nigeria is situated in the West African region and lies between longitudes 3 degrees and 14 degrees and latitudes 4 degrees and 140 degrees. It has a land mass of 923,768 sq.km. It is bordered to the north by the Republics of Niger and Chad. It shares borders to the west with the Republic of Benin, while the Republic of Cameroun shares the eastern borders right down to the shores of the Atlantic Ocean which forms the southern limits of Nigerian Territory. The about 800km of coastline confers on the country the potentials of a maritime power. Land is in abundance in Nigeria for agricultural, industrial and commercial activities.

CLIMATE
Temperatures across the country is relatively high with a very narrow variation in seasonal and diurnal ranges (22-36t). There are two basic seasons; wet season which lasts from April to October; and the dry season which lasts from November till March. The dry season commences with Harmattan, a dry chilly spell that lasts till February and is associated with lower temperatures, a dusty and hazy atmosphere brought about by the North-Easterly winds blowing from the Arabian Peninsula across the Sahara; the second half of the dry season, February – March, is the hottest period of the year when temperatures range from 33 to 38 degrees centigrade. The extremes of the wet season are felt on the south-eastern coast where annual rainfall might reach a high of 330cm; while the extremes of the dry season, in aridity and high temperatures, are felt in the north third of the country.

VEGETATION
In line with the rainfall distribution, a wetter south and a drier northern half, there are two broad vegetation types: Forests and Savanna.

There is also the mountain vegetation of the isolated high plateau regions on the far eastern extremes of the country (Jos, Mambilla, Obudu).

The savanna region are the major producers of grains, grasses, tubers, vegetable and cotton.

The Tropical evergreen rain forest region are the major producers of timber, cassava and fruit trees which includes citrus, oil palm, cocoa, rubber, among others.

POPULATION & LABOUR FORCE
Nigeria is famous for her huge population of about 186 million people – the largest national population on the African continent. This population is made up of about 374 pure ethnic stocks. Three of them, Hausa, Ibo and Yoruba are the major groups and constitute over 40 per cent of the population. In fact, about 10 ethnic linguistic groups constitute more than 80% of the population: the other large groups are Tiv, Ibibio, Ijaw, Kanuri, Nupe, Gwari, Igala, Jukun, Idoma, Fulani, Edo, Urhobo and Ijaw.

Due to a massive expansion in the education sector in the last two decades, the quality of the Nigerian work force has changed to include a large corps of highly trained personnel in mechanical, civil, electrical, electronics, chemical and petroleum engineering and biotechnics. There are at present over 30 Federal and State Universities, some of them specialist institutions -Technology and Agriculture. In addition, there are at least 20 Federal and State Polytechnics. Over 70,000 graduates in various disciplines come from these institutions every year. Disciplines, apart from pure sciences, engineering and technologies, include social sciences, business studies (management, banking and finance), architecture, environment and urban management studies. Also, a sizeable Nigerian population has been and is being trained outside the country, in some of the best colleges in the United States, Canada, United Kingdom, Germany, France, Russia, Japan and China.

Every year, about 2,000 of these Nigerians return home to seek employment or accommodation within the economy.

For the less skilled and unskilled labour, the country depends on the primary and secondary school systems whose annual enrolments are about 3.5 million and 1.5 million, respectively.

RESOURCES: AGRICULTURAL, MINERAL AND MARINE
Nigeria, in addition to its huge population is endowed with significant agricultural, mineral, marine and forest resources. Its multiple vegetation zones, plentiful rain, surface water and underground water resources and moderate climatic extremes, allow for production of diverse food and cash crops. Over 60 per cent of the population is involved in the production of the food crops such as cassava, maize, rice, yams, various beans and legumes, soya, sorghum, ginger, onions, tomatoes, melons and vegetable. The main cash crops are cocoa, cotton, groundnuts, oil palm and rubber. Extractions from these for export and local industrial use include cocoa flour and butter, rubber crumb, vegetable oil, cotton fibre and yarn. The rain forests have been well exploited for timber and wood products of exotic and popular species.

Oil and Gas, as important resources, are produced in the Niger Delta basin and off-shore on the continental shelf and in the deep-sea of the territorial waters. Nevertheless, there are also significant non-oil resources, many of which have been identified and evaluated: coal, iron ore, gypsum, kaolin, phosphates, lime -stone, marble, columbine, baryte and gold.

GOVERNMENT
The Federal Republic of Nigeria consists of thirty-six states, and the administrative headquarters and capital city is Abuja located in the Federal Capital Territory, which is geographically situated in the middle of the country.

Effective participation in governance by all adults is assured through the sharing of powers, revenue and responsibilities between the three tiers of government, i.e. the Federal Government, the State Governments and the various Local and Municipal Councils of the federation.

NOTICE TO NIGERIANS ON WITHDRAWAL OF PARENTAL AUTHORITY

Following recent incidents of child custody cases between some Nigerians in France and French Authorities, the Embassy wishes to remind Nigerians of the importance of familiarizing themselves with the French law. They should also know that: 1. Parents may have their children withdrawn from their custody in the event of danger or lack of interest in the child (if the police or other government agencies consider this to be in the best interest of the child) 2. In the event of conviction for a crime or offense against the parents of the child (in the event parents are convicted of a crime) 3. The withdrawal can be total or partial (for an individual child or all the children, it can also be either temporary for a specified time or permanent.) 4. It can concern a single parent or both ( a single parent or both parents may be found guilty and unfit to parent the child) 5. The withdrawal can only be pronounced by a Civil Judge or Criminal Judge; 6. The withdrawal is temporary; 7. Parents may have part or all of their parental authority restored. (Full restoration of parental custody is not guaranteed, parents may have only partial custody restored.) In the light of the above, Nigerians are hereby urged to take good care of their children, especially in accordance with the laws and expectations of the host country, France. Embassy of Nigeria Paris-France 27th October, 2020.

This website contains links to information about Nigeria’s rich and diverse cultures, tourism, news and a host of other websites which carry useful information on the Nation. 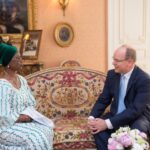